I’ve always admired Manny Pacquiao’s aggressive, “no fear” boxing style. But in recent years, it was his faith in God that inspired me more. From the articles I read, and the videos I’ve seen, I observed how a person could live out one’s faith. 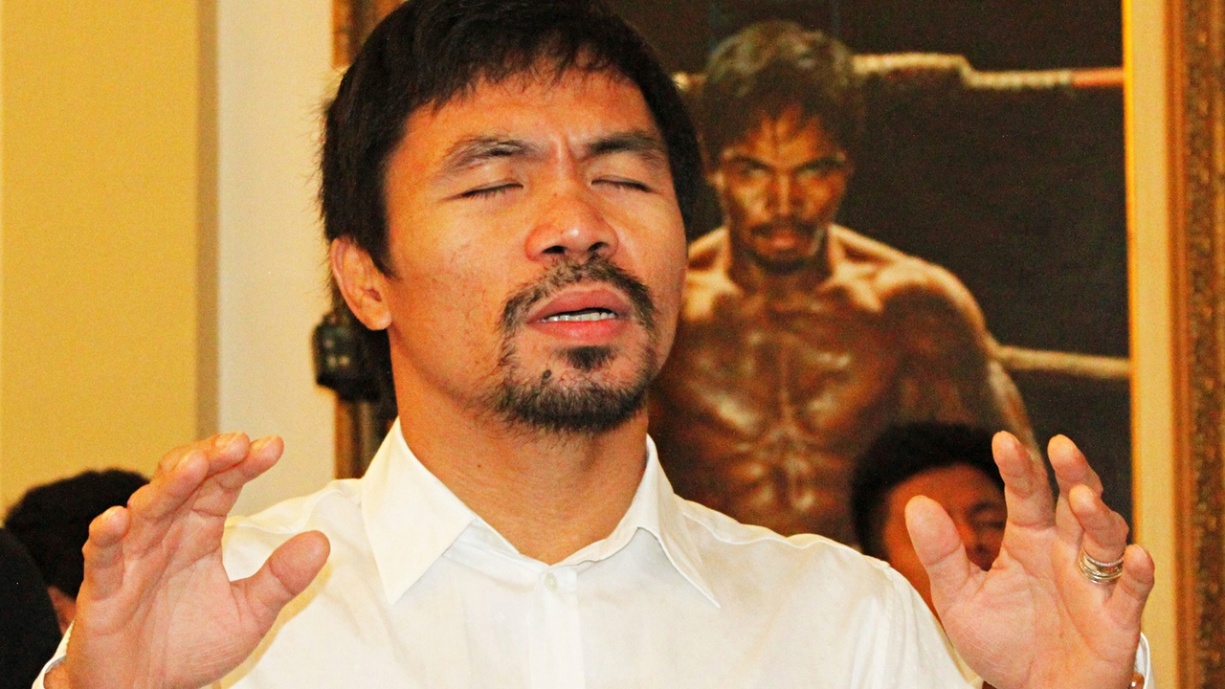 So many times in my life, I was reluctant to share my faith because of what people might think about me. There have been seasons when my faith was like an unstable rollercoaster… “UP” and strong when situations favor me, but “DOWN” and weak when circumstances were against me.

Manny taught me spiritual lessons that made me admire him more than just being a future “Hall of Fame” boxer.

1. The Evidence of Genuine Faith is My Transformed Life
Manny admitted that his life before was full of gambling, womanizing, and other worldly pleasures. What he lacked though was peace of mind. When he surrendered his life to Christ, he immediately gave up His worldly lifestyle.

There’s overwhelming evidence who he is following. He now has the peace that once eluded him.

When people observe my life, I want them to see overwhelming evidence who my top priority is. I must give up anything that could bring doubt that God is my first love.

2. Take Advantage of Opportunities to Share My Faith
When he is interviewed, he openly talks of his relationship with God. He doesn’t hide it, nor is afraid of what people might think. He doesn’t even force the conversation to be spiritual. It was a natural outflow of what’s in his heart.

I have to be bolder in sharing my faith to others. My conversations could be divine appointments. What I have to say could be what God wants them to hear from me. I mustn’t worry about how they’ll take it. I only leave the outcome to God.

3. Prioritize Reading, Believing and Memorizing God’s Word Daily
He meditates on God’s word and believes it wholeheartedly. One pastor said that after every bible study, Manny memorizes several bible verses after. The following day, he’s ready to recite them already!

There’s no shortcut to spiritual growth. However, it takes discipline if I want to fast-track the process. God surely wants to speak to me. I don’t want to miss a day without hearing Him!

4. My Faith is Not Dependent on My Circumstances
When he wins, he honors God. When he loses, he still honors God. I’m sure he gets discouraged during the times he’s unsuccessful. But he gives thanks to God regardless of the outcome.

I can’t let circumstances dictate whether I will grow in my faith or not. I must keep moving forward no matter what. My response to unfavorable circumstances is key to my spiritual growth.

5. Care for People’s Eternal Destiny, even of my Opponents!
I heard Manny say that after the boxing match, he hopes to sit down with his opponent so he could share God’s word to him. He finds this conversation as so vital.

I’d rather avoid my opponents. I don’t want to have anything to do with them. However, their eternal destinies are at stake. I must set aside my negative thoughts about them. I still hope to share the good news that can change their lives.

6. Give the Credit to Whom the Credit is Due
Manny always acknowledges that it was God who brought him out from “nothing” into who he is today. He is the only person in history to have won championships in 8 different weight divisions! He credits God for giving him all the skills and opportunities.

It’s so easy to wrongly claim credit for myself so that I would “look good”. But when I’m truly honest and humble, it’s clear that everything I’ve accomplished is because of God’s hand upon me. He has given me health, skill, favor, and wisdom to name a few factors.

To quote Manny, he said, “My purpose is not boxing but to proclaim the name of the Lord in the whole world that Jesus is the name of The Lord,”

I desire to do the same in whatever I do. Manny isn’t perfect nor faultless. But there are aspects in faith that I truly like to see in my own life more consistently.

2 Timothy 4:7 says:
“I have fought the good fight, I have finished the race, I have kept the faith.”

Discussion Question:
How has Manny Pacquiao been an inspiration to your faith? Share your inputs below.

I am the Lead Pastor of Christ’s Commission Fellowship New Zealand (CCF NZ). I started attending CCF in 1989 as a young teenager.

I used to work in various sales and marketing positions in multi-national companies before God called me to serve Him full-time in CCF.

It’s been an amazing journey from being a first timer, volunteer, Events coordinator, Lay Leader, Youth Pastor, and now a Lead Pastor and Church Planter. More about me and this blog...